Power and effect of "Namasmaranam" !! 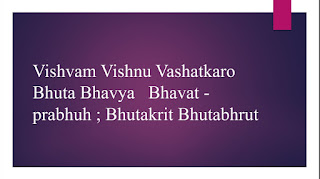 In the famous Sri Ranganatha Swamy temple in Srirangam, Tamil Nadu,  a long line of devotees would patiently wait  for the delicious Prasadam, even a few centuries ago. A poor Vaishnavite used to be the first one in the line and was notorious for demanding prasadam not only for himself, but for his entire family consisting of sixteen children! Everyday he would fight with the temple authorities for a huge amount of Prasadam, even as the devotees standing behind him had to make do with a tiny quantity. Exasperated, the authorities resorted to pushing him out of the temple. He would wail, “ My sixteen children would starve if they do not get this Prasadam, please have pity on me!”. One day, he decided to bring all his malnourished children to stand in the line. As usual, the fight with the temple authorities started on that day also. Sri Ramanuja, who happened to be at the temple at that time, asked the authorities what the commotion was all about. They told him about the demands of the Vaishnavite and said that they would not mind giving him extra Prasadam if only he was willing to do some service to the temple.

Turning to the Vaishnavite, Sri Ramanuja asked him what was preventing him from rendering some service to the temple. He replied,  “ Swamy! Look at my children ! They are under nourished and sick most of the times. All my time is spent in taking care of them. Moreover, unfortunately, I have not studied the Vedas or the Divya Prabandhams ( hymns by the Azhwars) and so cannot join in the temple Parayanam. What all I know is a part of Vishnu- sahasranamam only! What can I do ? “

Sri Ramanuja then asked him to recite the Vishnu Sahasranamam to the extent that he knew it. The Vaishnavite hesitated and then began the recitation. “ Vishvam Vishnu Vashatkaro Bhuta Bhavya   Bhavat -prabhuh ; Bhutakrit Bhutabhrut..”  That was all he knew in Vishnu-sahasranamam! Only upto the sixth name! The poor Vaishnavite was overcome by self pity and exclaimed, “ That is the only part I know, Swamy!”     Sri Ramanuja looked at him reflectively and said, “ You recited the sixth name, Bhutabrut. Now onwards you must go on doing the Japam of the sixth name, in this manner: Bhutabhrute namah. If you do this, you don’t have to seek  food; food will come to you, to your place! Will you do it?” The Vaishnavite eagerly nodded.

From that day onwards, he was not to be seen in the temple. All the commotion during the prasadam distribution time stopped altogether. A few days later, when Sri Ramanuja went to the temple, the temple authorities came to him. They had a different story to tell now. They said, “ Swamy! A strange thing is being observed nowadays in the temple. Though a substantial quantity of Prasadam is offered to Sri Ranganatha as usual, when we take up the distribution it is found that a considerable amount is missing! This has started happening after you told the fighting Vaishnavite to stop coming to the temple. Our security is tight but still this is happening. We feel that the Vaishnavite maybe responsible. Somehow he is managing to steal the Prasadam!” Sri Ramanuja was stunned to hear this. He asked them whether they knew where he stayed. They said, “ That is again strange! He has moved out of his house.” Sri Ramanuja asked them to search for the Vaishnavite and bring him, as he would like to see him. All their efforts were in vain to locate that person.

A few weeks later, Sri Ramanuja had to cross the Kollidam river that surrounds Srirangam, for an event in a nearby village. Suddenly he saw a person running after him, calling out, “ Swamy! Swamy!”. It was none other than the Vaishnavite who stopped coming to the Srirangam temple for Prasadam. He fell at the feet of Sri Ramanuja, weeping profusely. When he managed to talk, he said, “ Swamy! By your Grace, that boy is delivering the prasadam, both times everyday! All my children are no more sick or under -nourished. I have moved out of the place near the  temple so as not to get into problem with the temple authorities. I am eternally grateful to you. I am also doing the japam, ‘Bhutabhrute namah’, constantly.”   Sri Ramanuja was overwhelmed. “ Which boy? What did he say his name was?” asked Sri Ramanuja. The Vaishnavite replied that the boy introduced himself as The Servant of Sri Ramanuja!

Sri Ramanuja realised now what was going on. Sri Ranganatha Himself was delivering the food to the Vaishnavite, everyday, both in the morning and in the night! The Divine Name ‘ Bhutabhrut’ means One Who Nourishes the entire Universe!

That is the power and effect of "Namasmaranam" !!

That's why our great saints have been urging us to always go on reciting HIS name in whatever form you believe HIM to be.